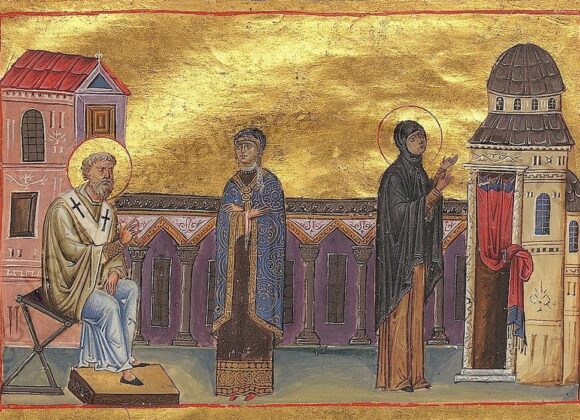 Repentant harlots turned-to-be trans saints presented Byzantine hagiographers with a challenge. Thought to exhibit a lack of self-control and excessive sexuality, pertinent to women, and sex workers in particular, – a subject of great concern for monastic authors – how could members of this stigmatized group achieve the standards of Christian piety, let alone saintly behavior? In portraying its fictional protagonist as an exemplum of masculine virtues in the context of nascent Palestinian monasticism, the lives highlight non-binariness of social identities in early Byzantium unsettling fixed gender categorization. Conceiving a trans figure of an ascetic subverting conventional binaries, the vitae originate a model for incorporating non-conforming masculinities of Byzantine society within the normative hagiographic genre.

The scholarship on late antique trans saints since its inception has been revolving around two conflicting interpretations of the Lives of cross-dressing ascetics. While the emphasis in the previous decades was on assimilation of masculinity and masculine piety by transvestite saints, recent scholars have focused on how forms of women’s agency arose in a religious and, more specifically, monastic context, rejecting masculinization of protagonists of the Lives as merely superficial and instrumental. What makes the feminist theory especially important is that it foregrounds precisely those forms of agency and identity that have tended to remain at the periphery of previous historiographical considerations, in particular, gender and sexuality. Recent intersectional reading of these lives, in favor of a “transgender” identity of these saints as “transgender monks,” returns to the view that masculine gender expression and identity were outwardly and inwardly manifested through the practices recounted in the narratives of these figures’ lives. It emphasizes saints’ “transition” (to male-gendered eunuchs), instead of mere spiritual transformation. This rereading clashes with feminist attempts to recuperate holy women’s agency and sanctity. I contend that the relationship between the feminist critique which aims to recuperate women’s agency and to center gender as a key site of female resistance and transgender theory which recovers historical trans subjectivities erased from the record are not those of incompatibility to each other. These two hagiographic readings are not irreconcilable. Crucially, transgender theory lens does not eradicates women as subjects but highlights other late antique lived subjectivities that have been negated or even assumed to have not existed.

Unlike real-life figures, late antique fictitious trans saints received their materiality primarily due to their association with the sites in Jerusalem. The events of their lives were inscribed in the sacred topography of the Holy Land, and of the holy city of Jerusalem in particular. These fictitious “desert monks” all received their cults and were embodied in their places of worship in late antique Palestine. I intend to show that there was certainly no one-way road from the production of the hagiographic literature in the monastic milieus to the establishment of the Palestinian holy places, but a movement in both directions, with the rarely acknowledged precedence of the emergence of a material cult of the saints of the Holy Land followed by its legitimation by the vitae.